The Highwayman Inn - History and Hauntings From The Ghost Book
Come and discover the history and hauntings of The Highwayman Inn in Devon. Read chilling tales of spooky encounters and plan yourself a visit, if you dare......
haunted pub, haunted devon, coaching inn, highwayman, the ghost book, ghost hunts, paranormal investigations,
15944
page-template-default,page,page-id-15944,theme-bridge,woocommerce-no-js,ajax_fade,page_not_loaded,,qode_grid_1400,hide_top_bar_on_mobile_header,columns-4,qode-product-single-tabs-on-bottom,qode-theme-ver-16.7,qode-theme-bridge,wpb-js-composer js-comp-ver-6.2.0,vc_responsive 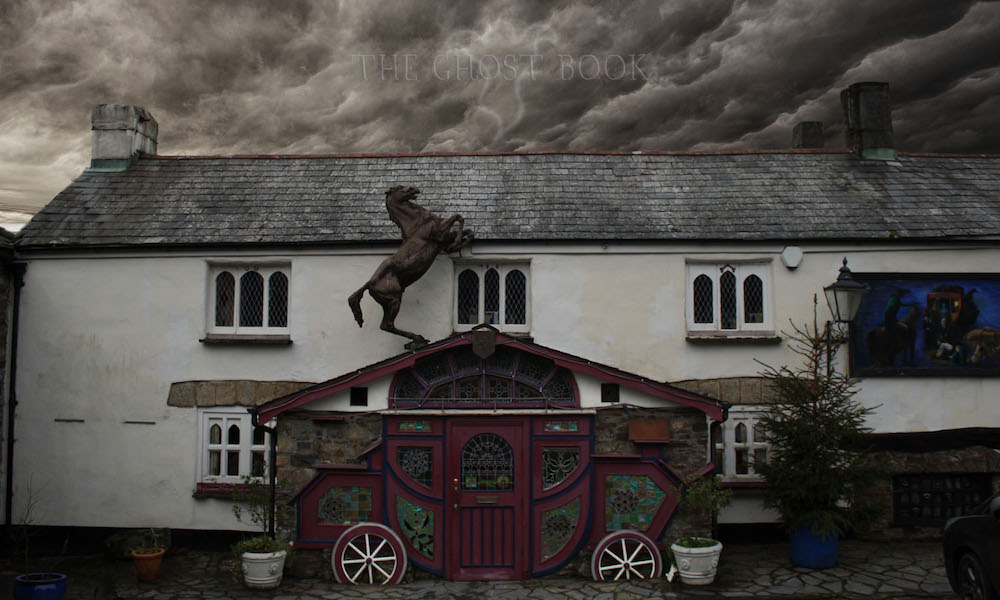 OTHER USES: The building has had no other uses and remains an inn to this day.

HISTORY
INTERESTING FACTS: It has had various names over the time, The Golden Fleece and The New Inn. However it was Buster Jones and his wife Rita, who made The Highwayman what it is today.

They moved to the pub in 1959 from Wales and began work on the transformation, which was to continue over the next forty years or more. Swept up with the atmosphere and history of the surroundings, the name ‘The Highwayman Inn’ was born. Much to the amusement of the locals, the pair transformed the old pub into the wonder we see today. The stagecoach on the front of the inn is the old Launceston to Tavistock carriage, still boasting the original colours. Slabs of tree trunks provide handsome bar tops and the entire inn glitters with coins, in cracks in the floor and wedged into beams, left as an offering to the fairy folk.

To enter the ‘Rita Jones Galleon Room’, you pass through a wooden door. Pay attention to this door. It belonged to the ill-fated whaling ship, The Diana. In 1866, during an expedition to Baffin Bay on the southwest coast of Greenland, the ship became stuck in ice for over six months. During this time, the ship’s captain John Gravill and many of the crew lost their lives. The ship finally made it back to the Shetland Islands. Diana sailed her last journey in 1868 when in strong winds, was washed against rocks in Lincolnshire and wrecked.

CLAIM TO FAME: The pub has been described as ‘the most unusual pub in Britain’.

• Sam-a man dressed in green with a feather in his cap.

• A man named Joseph who sits at the bar.

• Captain ‘Grenville’ was picked up by a medium. Could this be Captain Gravill from The Diana?

Buster and Rita’s daughter Sally is now the current landlady and owner, along with her husband Bruce. I asked Sally if she had experienced anything supernatural at the inn. She said the only encounters she has experienced are that which she believes to be her father. The unmistakable aroma of her father’s ‘Churchill’s’ cigars can often be smelled. She goes on to say,

“Also, my father was a stickler for locking the front door at 10.30 precisely to stop stragglers from coming in and then not being able to close up. Every now and again, the main interior door opens by itself at that time and closes and I am sure my father is seeing if I am closing on time. I’m afraid he will be disappointed as I stay open until much later these days.”