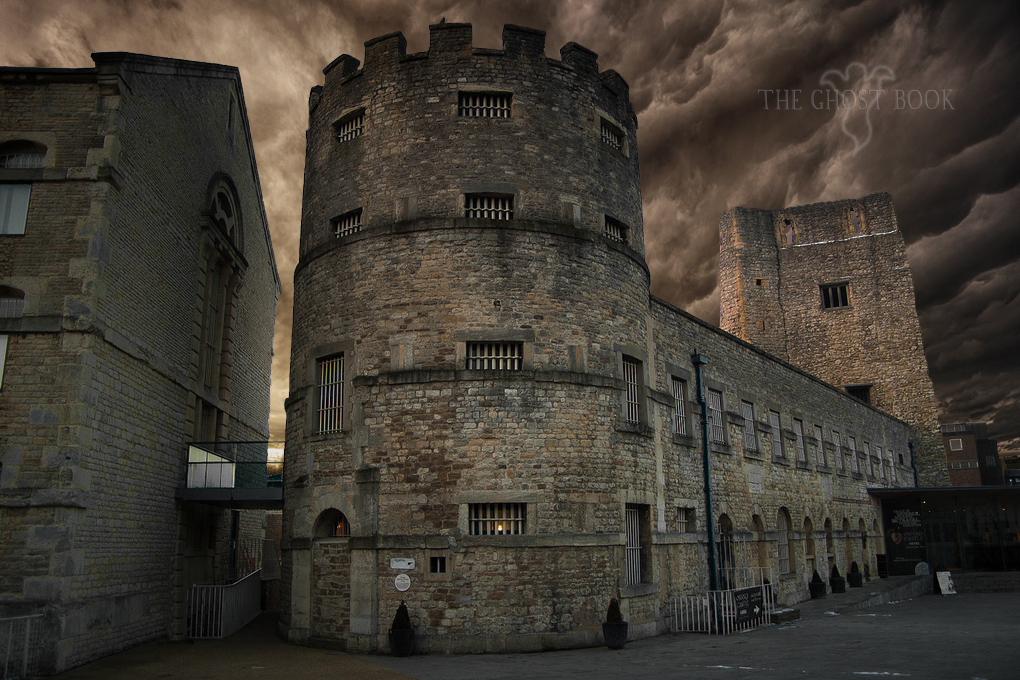 Walking around Oxford city centre on a Saturday night is like many other places. People dressed up for the evening, perfume and aftershave wafting through the air, loud music escaping from clubs and bars, competing for the attention of revellers. And then there’s me, walking around in comfy trainers, a warm jumper and backpack filled with ghost hunting kit, in search of Oxford Castle. I didn’t have to look far.

Slap bang in the middle of all the hustle and bustle she stands proudly, a complete juxtaposition between this modern world and the one in which she was built, over a thousand years ago.

Stepping inside the castle, feeling the dust under my feet and inhaling that damp, cool air of history, I could have been a million miles away from those outside, and a millennium away!

OTHER USES: The castle became a jail and criminal court for Oxford during the 14th Century. After the English Civil War of 1642, Oxford Castle’s primary role was the town prison and execution site.

PREVIOUS BUILDINGS ON SITE: There has been evidence of an earlier Anglo-Saxon habitation on the site. However, the Domesday Book shows no record of any demolition, which suggests the site was clear when the castle was built. Houses may have been destroyed during the Norman seizure of the town.

INTERESTING FACTS: Many people met their end at Oxford Prison. But not many can say that they survived their execution. Anne Greene did. She was a scullery maid at the manor house of Sir Thomas Reede. She bore a child after being raped by Reede’s grandson. The child was stillborn, but Greene was arrested and charged with murder, despite medical evidence proving the contrary. On December 14th, 1650 Greene was hanged at Oxford Prison. She was pronounced dead by the prison doctor, and handed over to medical students for dissection. Before the students began their work, it was discovered that Anne had a faint pulse. Unbelievably, she had actually survived the hanging. After treatment, she made a full recovery and was pardoned of her punishment.

If you are brave enough to spend the night in a former cell, then why not book yourself into the Malmaison Oxford Castle. The former A Wing of the prison became a hotel in 2006. Malmaison translates to ‘bad house’. Gulp!

CLAIM TO FAME: In an article written by the BBC, Oxford Castle is home to Britain’s ‘most seen’ ghost. That being of Empress Matilda, who stayed at the castle before her escape in 1142, when the castle was beseiged by her cousin King Stephen. She had returned to England in 1125 after the death of her husband, King Henry V. Being Stephen’s rival to the thrown, when he attacked, she was forced to flee.

GRIZZLY HISTORY: Oxford Castle is said to have been subject to its very own curse. A plague, known as The Black Assize of 1577, broke out after the trial of Rowland Jenke. He had both ears removed as a result of his ‘injurious words against the Queen’. Jenke cursed the jury, the court and the city. At least three hundred people lost their lives as a result of the plague, or ‘Oxford Castle Curse’.

DEATHS: Mary Blandy is one of the most well known prisoners of the castle. She was hanged on 6th April 1752 for poisoning her father with arsenic. In her defence, she claimed she thought she had bought a love potion to encourage her father to approve of her relationship with William Henry Cranstoun. She was found guilty but speculation around her innocence continued on into the 1800’s. Thomas Hadden was one of the prisoners who didn’t wait for impending sentence. He hanged himself in his cell on 16th July 1782 after being found guilty of robbing mail. These are just two stories of many. There have been more deaths at Oxford Castle, and the grounds it stands on, than we will ever know. From battles of the Norman Conquest, to deaths from poor prison conditions, executions, murders and suicide.

• A monk in the crypt known as ‘Bernard’. Others say it is a darker energy in disguise.

Sensory: People report feelings of being watched and followed.

Poltergeist: Heavy doors opening on their own. Stones thrown at investigators. Items have been mysteriously damaged around the castle.

“Whilst holding a vigil in the upper floor of the debtors prison area – I was relating what I was seeing/feeling – in this case a guard doing his rounds. we then (as a group) heard the heavy footfall on the concrete steps leading up from the ground floor, it sounded as a person wearing heavy boots. The door to the stair case was closed (it takes a little effort to close the door as it is an inch thick metal) to our surprise the door was flung open, and no one there – (physically) – the group were stood agasp.“